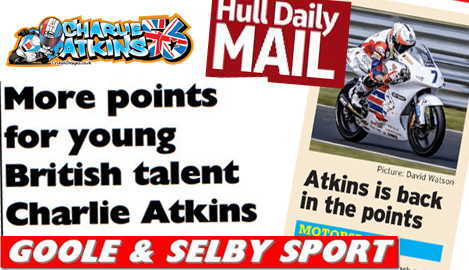 14-year-old Charlie Atkins from Goole was back on his Moto3 last weekend in the third round of the British Talent Cup. Riding identical Honda 250cc machines Atkins competes against 22 other riders in a championship designed to find Britain’s best motorcycle racers.

Round three was at the Snetterton 300 circuit in Norfolk. The 2.97 mile circuit is the second longest in the country and underwent substantial redevelopment in 2011 and is now an FIA standard circuit.

Atkins set his best lap, a 2:07.568 on his last of 12 laps during free practice one, as he familiarised himself once more with the track. In FP2 Atkins further improved reducing his lap time to 2:06.424 but he dropped to 15th overall.

Qualifying didn’t go to plan for Atkins. Although he further improved his lap time he struggled to feel comfortable on the bike. His time of 2:05.915 placed him down in 16th for both races over the weekend.

Despite the handicap of starting on row six Atkins made a superb start to the first race of the weekend. By the end of the first lap he was in ninth position. Although the leading group had gone he was involved in a thrilling battle with Jack Hart, Jack Nixon and Jamie Davis throughout the 14 lap race. He crossed the line in ninth place and his lap time of 2:05.426 was faster than his qualifying time.

Atkins got another good start to the second race until an error by another rider in turn two forced him back down the order. By turn three he was already recovering places and crossed the start finish line in tenth at the end of the first lap. On the second lap Atkins braked late trying to gain another position. He managed to squeeze up the inside of the other rider but then tucked the front and crashed out of the race.

Charlie Atkins said, “Firstly thanks to Dorna Sports and all who make the British Talent Cup happen. This is the second round in a row where I have struggled in qualifying. My starts have improved which has helped but I need to qualify higher up the grid. Race one was exciting but I made a mistake in the second.”