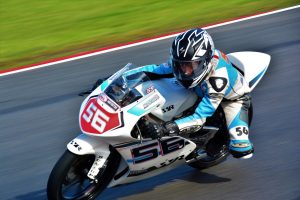 Goole racer Charlie Atkins was at Brands Hatch in the sixth round of the Hel performance Motostar British Championship last weekend.

The Kent circuit has always proved difficult for Atkins but after two strong results at the last two rounds his confidence had increased.

There were two free practice sessions on the Friday. In FP1 Atkins finished fifth quickest. In the afternoon session he reduced his lap time by more than three tenths of a second but slipped to sixth overall.

The qualifying session on Saturday was at 9am in the morning. There had been heavy overnight rain and although the sun was shining the track was still damp. The riders went out on wet tyres at the beginning of the thirty minute session. Atkins initially struggled to set a good time but with ten minutes remaining the track had dried sufficiently for a switch to slick tyres. Atkins then went on to set his best qualifying at this track with a 1:41.649 securing fifth place for race one.

As race one approached on the Saturday afternoon the circuit was covered in dark clouds and the rain began to fall heavily. After a delay the race was postponed meaning there would be two races on the Sunday.

On the Sunday Atkins and his team-mates were interviewed by the legendary Fred Clarke and Larry carter on BSB Radio after the mornings short warm up. It was a great opportunity for Charlie to talk about his racing career to a packed crowd.

The first race was the 14 lap feature race and took part late afternoon. Atkins made a good start maintaining fifth by the end of the first lap. He then came under race long pressure from Cameron Horsman as the more experienced FAB-Racing rider looked for a way past Wilson Racing’s Charlie Atkins.

Despite the pressure and a gap of just tenths of a second Atkins maintained control to cross the line in fifth spot.

The second race was ten laps and late on Sunday afternoon. Again Atkins got away well and was running fourth during the 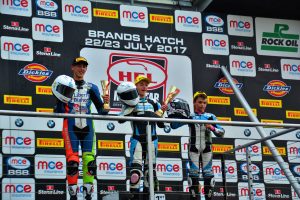 early laps. As the race past the half-way stage Atkins moved into third position where he stayed until the end of the race. A clearly delighted Atkins secured his first podium of the current season having made to visits last season.

27 points from this weekend’s racing leaves him just four behind the fifth place rider in the championship.

Charlie Atkins said,” I’m really chuffed! This track has always been difficult for me and it’s still not my favourite but to get a podium and a fifth was great. It also meant in race two Wilson Racing had two riders up there. Congratulations to my team-mate Max Cook who took two race victories. Thanks to Gary and Nikita for such an amazing bike and my sponsors, Harman Carpets, The Bell and Crown pub Snaith and MustHaveMediaServices.com.”