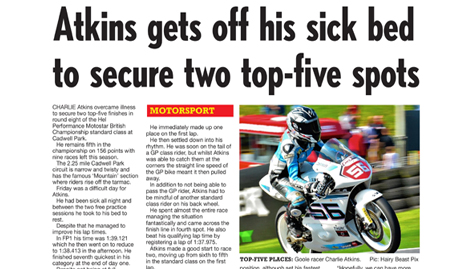 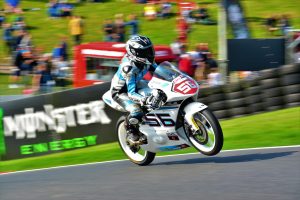 Round eight of the Hel Performance Motostar British Championship standard class meant a trip to Lincolnshire’s Cadwell Park for Goole’s Charlie Atkins. The 2.25 mile circuit is narrow and twisty and has the famous ‘Mountain’ section where riders rise off the tarmac.

Friday was a difficult day for Atkins. He had been sick all night and between the two free practice sessions he took to his bed to rest. Despite that he managed to improve his lap times. In FP1 his time was 1:39.121 which he then went on to reduce to 1:38.413 in the afternoon. He finished seventh quickest in his category at the end of day one.

Despite not being at full strength Charlie Atkins took to the track for the Saturday qualifying session, early in the morning. In the first few laps he was running around sixth but as fatigue got to him he dropped to eighth by the end of the session. He still reduced his lap time further finishing with a 1:38.107

Atkins made a solid start to the 12 lap race on the Saturday afternoon. He immediately made up one place on the first lap. He then settled down into his rhythm. He was soon on the tail of a GP class rider, but whilst Atkins was able to catch them at the corners the straight line speed of the GP bike meant it then pulled-away. In addition to not being able to pass the GP rider, Atkins had to be mindful of another standard class rider on his back wheel. He spent almost the entire race managing the situation fantastically and came across the finish line in fourth spot. He also beat his qualifying lap time by registering a lap of 1:37.975.

Atkins made a good start to race two moving up from sixth to fifth in the standard class on the first lap. He was running with the leading group initially. However, as in race one, a GP class rider then dropped their pace and he lost touch with the group. Unfortunately for Atkins, whilst he caught the rider through the corners they just pulled-away from him down the straights. Unable to find a way through Atkins finished the race in fifth position, although set his fastest lap of the weekend a 1:37.857.

Charlie Atkins said,” I made two good starts this weekend which was really pleasing. But both races could have been better if I hadn’t got stuck behind a GP class rider. It meant I had two frustrating races on a circuit where I was on the podium last year. I couldn’t overtake and just had to watch the others ride away.

Hopefully, we can have more luck at Silverstone in three weeks’ time. I’d like to thank Martin Meecham for buying my tyres for this round. Also my sponsors, Harman Carpets and Flooring, Repair and Restore Body Shop, The Bell and Crown pub Snaith, RR Automotive Glazing and MustHaveMediaServices.com and of course Gary and Nikita of Wilson Racing for giving me a great bike.”

Charlie Atkins remains fifth in the championship on 156 points with nine races left this season.