After another dominant display at Donington Park Charlie Nesbitt was crowned champion of The Hel Performance Motostar British Championship, the Moto3 support class of the British Superbike series. The Swindon racer has won 15 races this season, 12 of them consecutively. It’s been a superb performance in a highly competitive championship.

Charlie Nesbitt, “It’s been an amazing season. The bike from Nick Carpenter and e3 motorsport / Redline KTM has been fantastic as have the Pirelli tyres. My sponsors and my family have been amazing all year to get me here. It’s a dream come true.” 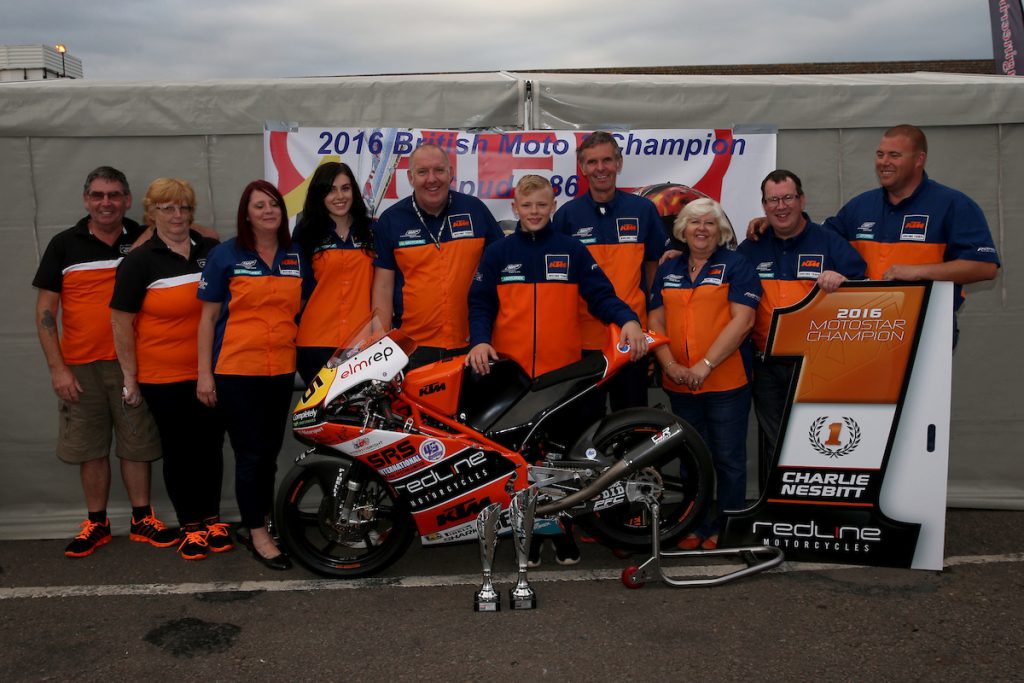 What was to turn out to be a victory weekend for Charlie Nesbitt started with a wet free practice on Friday. Several riders, including Nesbitt, decided to stay in the pits rather than take any risks in poor conditions.

The weather changed for the first of the two qualifying sessions with a dry track available to the riders. Charlie Nesbitt rode 17 laps setting his best time of 1:38.749 on the 13th of those. Despite the knowledge that he could wrap up the title in race one, there were no nerves from the 15-year-old Wiltshire racer. His time was 1.129 seconds better than the second fastest rider.

Early Saturday morning the riders were back out for the second qualifying session. The session was cool and saw several fallers. Nesbitt further reduced his lap time by 0.601 seconds meaning he would start on pole position for the first race. The gap to the following rider was over a second putting him in a strong position for the race and his hopes of sealing the championship at Donington Park in the first of the two races.

The first race of ten laps was on the Saturday afternoon and Nesbitt was raring to go. He immediately hit the front and had already opened a gap of over half a second by the end of the first lap. However, an incident between two other riders saw the safety car deployed and the lead evaporated. At the end of the third lap the safety car was withdrawn and Nesbitt was free to try again. He wasted no time in pulling away, determined to secure the title at the earliest opportunity. Nesbitt rode an error free race and went on to win race one by 4.769 seconds and with it the Hel Performance Motostar British Championship title.

Despite having wrapped up the title on Saturday, Nesbitt was keen to take another race win in the 14 lap race scheduled for the Sunday and was pushing just as hard.

He made another great start taking the lead into the first corner. Quickly running with him was Dani Saez who went into the lead during the third lap but Nesbitt was right on his back wheel. They were racing wheel to wheel going towards Goddards on the fifth lap when Nesbitt re-took the lead as Saez ran a little wide. From then on Nesbitt made sure the victory was going to be his. He pulled-away opening a gap of 0.636 seconds by the following lap. Saez was unable to maintain Spud Nesbitt’s pace and the newly crowned Champions when on to win the race by 9.455 seconds at the end of the 14 laps.