Charlie Nesbitt arrived at Thruxton for the six round of the Hel Performance Motostar Championship with a lead of 57 points over his nearest rival, following two race wins at the last round at Snetterton. 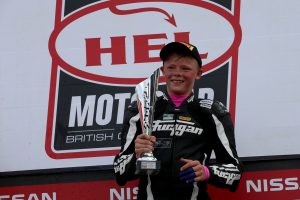 Thruxton is a circuit built on an old World War II airfield with little straight track but some very fast flowing corners meaning it is one of the fastest circuits on the calendar. The conditions for the rider for Friday free practice were almost perfect. Nesbitt, who already holds the lap record at the circuit set out his stall early on but topping the time sheets for the duration of the session. He finished free practice with a time of 1:21.796 which put the e3 Motorsport / Redline KTM rider 0.659 seconds ahead of the second quickest rider.

In Q1 Nesbitt set off in the same vein as he had done in free practice. He quickly set the pace and left the other riders having to push hard to get close to him. Seemingly untouchable Nesbitt entered the pits on lap ten having posted the fastest time of 1:22.168 of the session. However, on his return to the track he had a fall and was taken to the medical centre as a precaution. Despite not being able to finish the session his time remained unbeaten.

Friday’s accident left Nesbitt with two bandaged fingers and needing a new set of gloves but other than that the Wiltshire youngster was ready to go again. Q2 was cooler and the lap times immediately began to fall. The session was much closer than Q1 had been with Nesbitt battling with Brouwers, Archer and Owens for the pole position. It looked like Nesbitt might have to settle for the middle of the front row until his last flying lap when he crossed the line with a time of 1:21.573 to take pole position by 0.045 seconds. This was Nesbitt’s third consecutive pole position.

Nesbitt took victory in race one which was a ten lap sprint on the Saturday afternoon. He crossed the finish line 0.965 seconds ahead of Brouwers in second and Archer in third. He had led from the end of the first lap and although he didn’t make the break-away he had in previous races, from the half-way stage he was in control of the outcome.

In the 12 lap race on Sunday his opposition gave a much stronger showing in the opening laps as four different riders held the lead. It wasn’t until the half-way stage that Nesbitt managed to make a bit of breathing space opening a gap of 1.120 seconds at the end of the seventh lap. However, once he managed to make that gap he slowly pulled away from the rest of the field to take his second victory of the weekend.

He now has 230 points and now leads the championship by 91 points.

Charlie Nesbitt said after the race, “It’s great to come away with another fifty points as the weekend was a tough one. Mike Brouwers pushed me really hard in the first race and also in the second until he fell and I wish him a quick recovery. It was a real battle in those early laps”.

He added, ”I must thank Nick Carpenter, e3 Motorsport and Redline KTM as well as all my great sponsors who enable me to race.”
The next round of the championship takes place at Brands Hatch between 5 to 8 August.