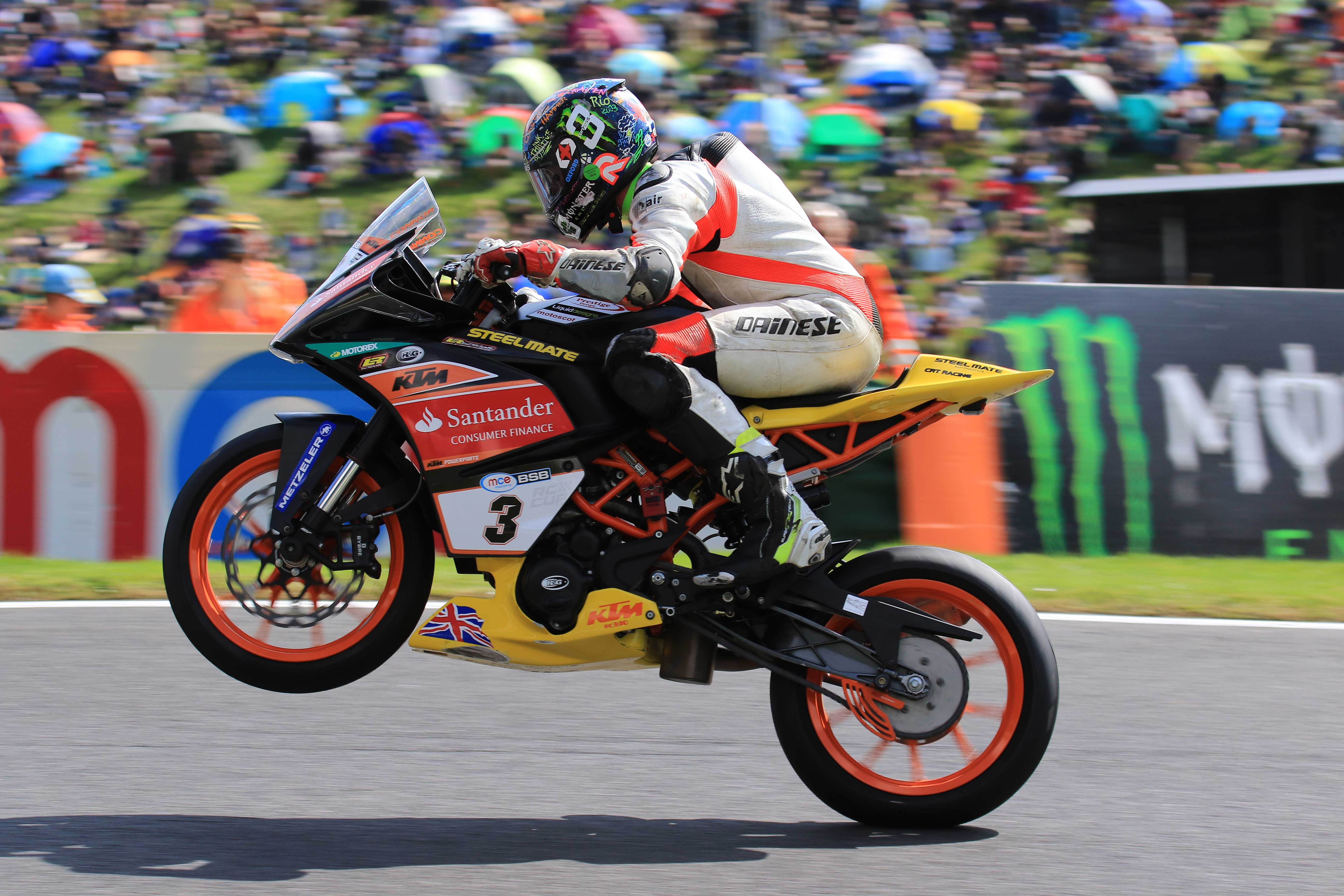 Connor Thomson was back on the podium at Cadwell Park with a win and a second place in the Santander Consumer Finance KTM British Junior Cup. He also competed in the Hel Performance Motostar British Championship as a wild card entry. The full press release is shown below. Abridged versions appeared in the Surrey Mirror and also on the website of the Sutton Guardian. 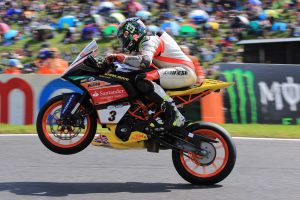 Connor Thomson took a win and second place in the Santander Consumer Finance KTM British Junior Cup Championship for the Horley based PH Motorcycles / CS Tyres / CRT Racing Team. Although he can’t win the championship his efforts saw him close to within 13 points of the second placed rider.

Last bank holiday weekend 14-year-old Connor Thomson was taking part in the latest round of the KTM British Junior Cup at Cadwell Park and he was also entered into the Hel Performance Motostar British Championship on a standard Moto3 as a wild card entry.

In the KTM 390 series Thomson was immediately on the pace and put his PH Motorcycles / CS Tyres machine at the top of the time sheet. His lap time of 1:50.040 was 1.306 seconds quicker than the second fastest rider.

The KTM British Junior Cup sole qualifying session was early on the Sunday morning. Connor Thomson managed ten laps during the twenty minute session but was unable to quite match his lap time from free practice yesterday. He would start 6th on the grid.

In the first 8 lap race Thomson made a superb start from the second row moving into third position by the end of the first lap. He was soon up to second place and on the back wheel of Jack Nixon. These two then pulled away from the remainder of the field. Despite keeping close to Jack Nixon throughout the race Thomson was unable to overtake but crossed the line with a superb second place and his fourth podium of the season.

The second KTM race was on Monday morning and after crashing in morning warm up Thomson was looking to make amends. He made an excellent start slotting into second place behind the championship leader Aaron Wright. The two of them began to open a gap over of around two seconds on the chasing riders of Nixon and Wasley. Thomson and Wright had a great dual at the front of the race as the lead changed hands several times. As they entered the last lap Thomson was in second but right on the back wheel of Wright. In the penultimate corner Wright made a mistake but Thomson kept calm and took the lead and the victory. 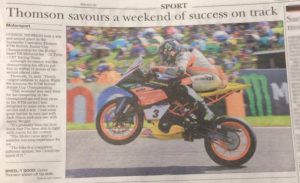 Thomson was also racing on a standard Moto3 machine in the Hel performance Motostar British championship. It was immediately obvious, that 14-year-old Thomson’s height of 5’ 11” was not in his favour on such a small machine which has a lot more power than his KTM. Riding the Honda NSF250R for the first time for Cresswell Racing he steadily reduced his lap time as he got more comfortable with the unfamiliar bike. He finished in a respectable 12th position in drizzling conditions in free practice.

In Q1 the spitting rain continued. The end of the session was cut short as the rain fell more heavily but Thomson managed some more valuable track time and completed seven more laps.

There were bright and dry conditions on Sunday morning for Q2. This saw lap times tumble with Connor Thomson finishing the half hour session in 12th place with a time of 1:42.611.

The first race on the Moto3 machine saw Thomson make a steady start as he continued to learn this faster, lighter and much smaller machine. He was soon lapping at the same times he achieved in qualifying. Unfortunately, on the final lap of the race he braked a little later going into the curve just before the bottom of The Mountain and he hit the bottom of the suspension. As he rode over some ripples in the track he lost the front and crashed out of the race.

In his final race of the weekend finished ninth in the standard category. Thomson made a solid start in his second Moto3 race and was keen to make it to the finish after his last lap fall in the first race. He gained a lot of valuable experience with the Moto3 Honda and reduced his lap time by ten seconds over the weekend on a difficult circuit. He ended his Moto3 experience with seven championship points.

The final round of the KTM British Junior Cup is at Donington Park 16 to 18 September. After that the top five in the British Championship get to compete in the World KTM final at Assen later in the year.

Connor Thomson, “Firstly, congratulations to Aaron Wight for winning the KTM British Junior Cup Championship. This weekend was very busy for me competing in two championships and four races. In the KTM series I was delighted to come away with a second and a win. I had some great battles in race one with Jack Nixon and race two with Aaron Wright. It’s probably been the first track that I’ve been able to fight with Aaron for the victory. The Moto3 races were a massive learning experience for me. The bike is a completely different animal, but I loved the speed of it. Thanks to Steelmate and Cresswell Racing. Also CS Tyres, John Jefferson, P&H Motorcycles.”