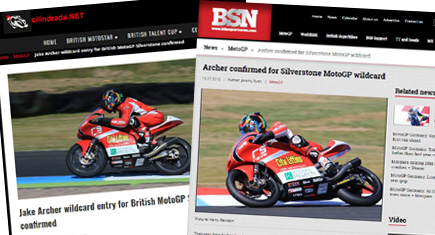 Teenager Jake Archer has been confirmed as a Moto3 wildcard at next month’s Silverstone MotoGP round.

The 16-year-old from Andover, who currently leads the Hel Performance British Motostar Championship, is in good form in the British Superbike Moto3 support series having won five of the six races so far this season with the City Lifting team and has 45-point series lead.

The MotoGP event will see him racing against the best Moto3 riders in the world and will be a very tough challenge.

“I’m really pleased to have another opportunity to race at the top level. Racing on a circuit as famous as Silverstone in front of a British crowd will be awesome. Last year we had some bike issues and in the end I had to retire from the race with three laps remaining. Hopefully this time, we can go all the way,” said Archer.