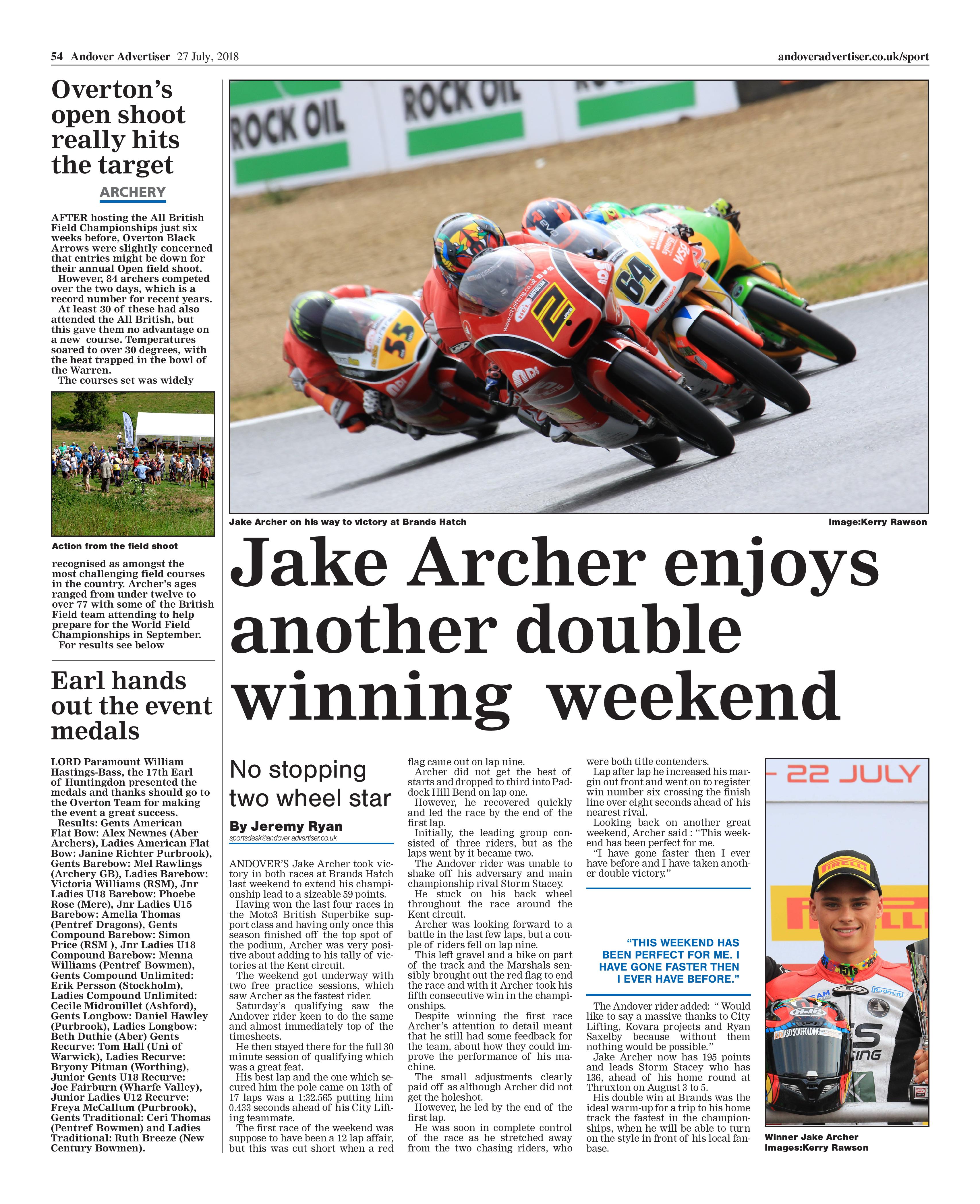 Andover’s Jake Archer took victory in both races at Brands Hatch last weekend to extend his championship lead to a sizeable 59 points.

Having won the last four races in the Moto3 British Superbike support class Archer was positive about adding to his tally of victories at the Kent circuit.

The weekend got underway with two free practice sessions on the Friday. In FP1 Archer completed 17 laps of the 2.4-mile circuit and finished top of the time sheet with a lap time of 1:33.964.

The second free practice session came after a heavy shower and the track was still damp. Archer waited in the pits as the track began to dry.  He then steadily increased his pace on slick tyres and finished the session as the fastest rider and with a huge margin of 1.174 seconds.

Overnight the team spent time preparing the bike for the important qualifying session first thing on Saturday morning. Archer was almost immediately top of the timesheet and stayed there for the full thirty-minute session. His 13th of 17 laps was a 1:32.565 putting him 0.433 seconds ahead of his City Lifting teammate. 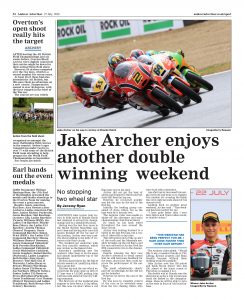 The first race was 12 laps but was cut short when a red flag came out on lap nine. Archer didn’t get the best of starts and dropped to third into Paddock Hill Bend. However, he recovered quickly and led the race by the end of the first lap. Initially, the leading group consisted of three riders but as the laps went by it became two. Archer was unable to shake off his adversary Storm Stacey who was stuck on his back wheel throughout. Archer was looking forward to a battle in the last few laps but a couple of riders fell on lap nine and with gravel and a bike on part of the track the Marshals sensibly brought out the red flag. Archer took his fifth consecutive win.

Despite winning the first race Archer’s attention to detail meant that he still had some feedback for the team about how they could improve his performance. The small adjustments clearly paid off as although Archer didn’t get the holeshot he led by the end of the first lap. He was soon in complete control of the race as he stretched away from the two chasing riders, who were both title contenders. Lap after lap he increased his margin out front and went on to register win number six crossing the finish line over eight seconds ahead of his nearest rival.

Jake Archer said,” This weekend has been perfect. Gone faster then I ever have found brands GP and taken another double. Would like to say a massive thanks to city lifting Kovara projects and Ryan saxelby because without them nothing would be possible.

Jake Archer now has 195 points and leads Storm Stacey who has 136. The next round is at his local track Thruxton on 3 to 5 August.