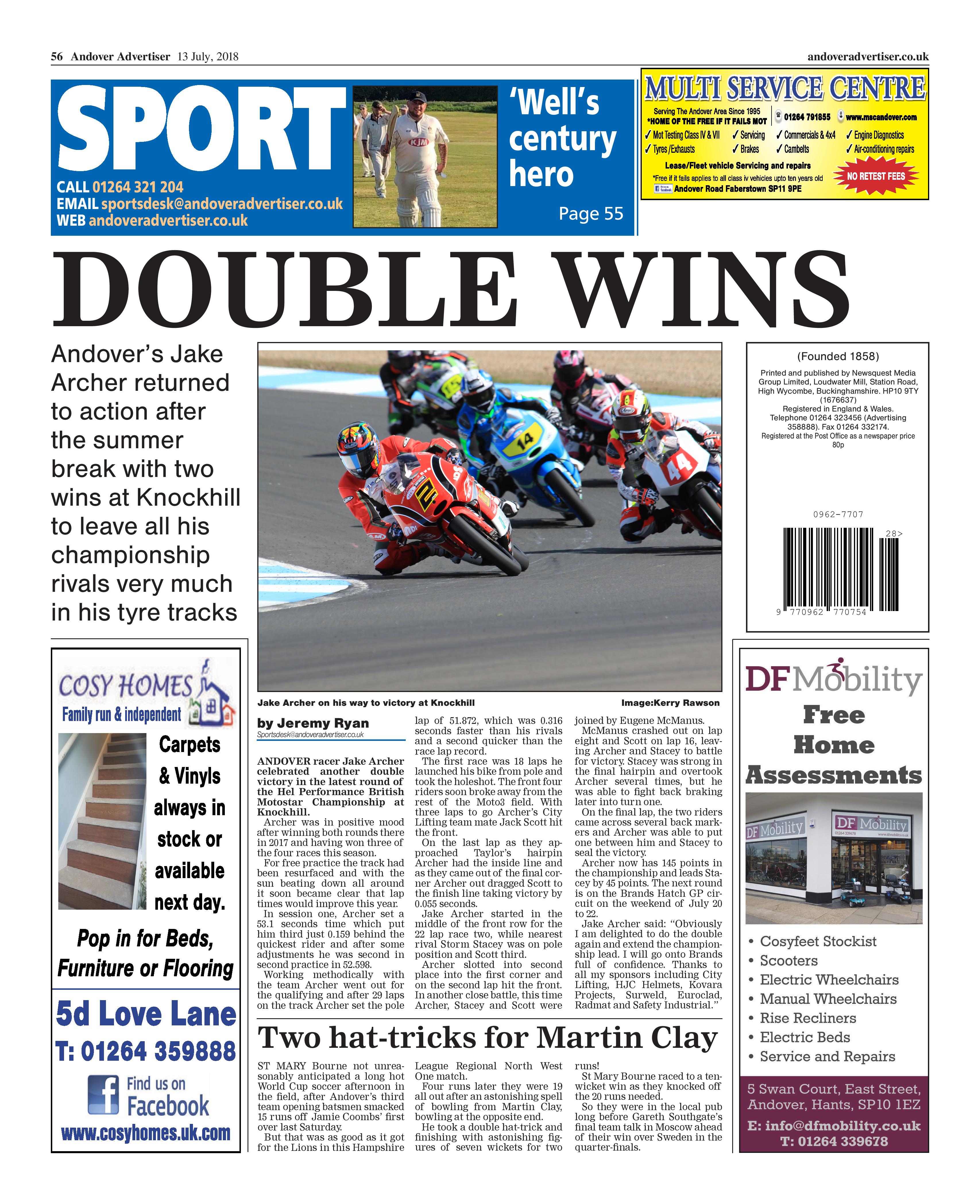 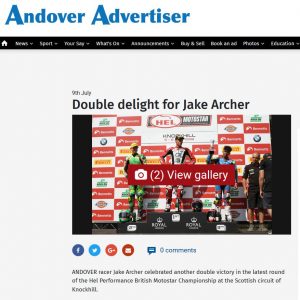 ANDOVER racer Jake Archer celebrated another double victory in the latest round of the Hel Performance British Motostar Championship at the Scottish circuit of Knockhill.

Archer was in positive mood after taking victory in both rounds in 2017 and having won three of the four races this season he also had a 31 point lead in the championship.

For free practice the track had been resurfaced and with the sun beating down all around it soon became clear that lap times would improve this year.

In session one, Archer set a 53.1 which put him third quickest just 0.159 behind the quickest rider.

After feedback about the new surface, Archer worked with his mechanics to make some small adjustments for free practice two.

He reduced his lap time to 52.598 and was second quickest.

Again working methodically with the team Archer went out for the qualifying session with plenty of confidence. After 29 laps on the track Archer had set a lap time of 51.872.

This was pole position, 0.316 seconds faster than his rivals and a second quicker than the current race lap record.

The first race was 18 laps of the Scottish circuit. Archer launched from pole position and took the holeshot. The front four riders soon began to break away from the rest of the Moto3 field. Archer led for almost the entire race but was unable to gap the three riders behind. With three laps to go his City Lifting team mate Jack Scott hit the front but Archer was on his back wheel.

On the last lap as they approached Taylor’s hairpin Archer had the inside line. As Archer and Scott came out of that final corner Archer was able to out drag Scott to the finish line taking victory by 0.055 seconds.

Jake Archer started in the middle of the front row for the 22 lap race two, while Storm Stacey was on pole position and Jack Scott third.

Archer slotted into second place going through the first corner, but it was here on the second lap that he took the race lead.

It was another close battle but this time Archer, Stacey and Scott were joined by Eugene McManus.

McManus crashed out on lap eight and Scott on lap 16, leaving Archer and Stacey to battle for victory.

Stacey was strong in the final hairpin and overtook Archer several times, but Archer was able to fight back braking later into turn one.

On the final lap, the two riders came across several back markers and Archer was able to put one between him and Stacey and thread his way through to take his second victory of the weekend.

Jake Archer now has 145 points and leads Storm Stacey by 45 points. The next round is at Brands Hatch on the GP circuit on the weekend of July 20 to 22.

Jake Archer said: “Obviously delighted to do the double again and extend the championship lead. I will go onto brands full of confidence.