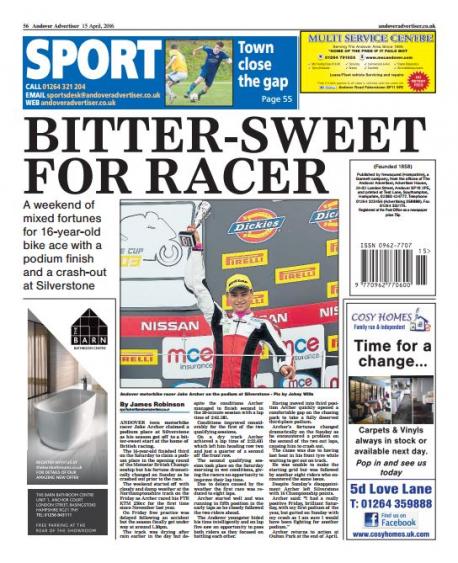 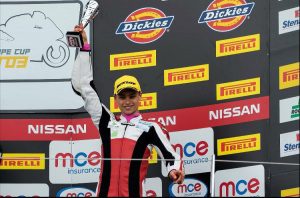 It was a cloudy but damp start to proceedings at the Silverstone circuit in Northamptonshire for the opening round of the Motostar British Championship. The riders compete on the same circuit as the MotoGP and World Superbike rides. Jake Archer was competing on the FTR KTM 250cc machine for the first time in a race since last November when the 2015 season ended.

On Friday, free practice was delayed after an accident to another rider in another category but the season finally got underway at around half past one. There were cloudy skies and the track was drying after rain earlier. Despite the conditions Jake Archer managed to finish second in the twenty minute session with a lap time of 2:42.181. For the first of the two qualifying sessions, the Motostar British riders take part in, conditions had improved significantly. On a dry track Archer achieved a lap time of 2:22.431 which left him heading row two and just quarter of a second off the front row. The second qualifying session took place on the Saturday morning but in wet conditions. There was no opportunity for anyone to improve their lap time in those conditions, but it was an opportunity to familiarise himself with the conditions in case the races are also wet.

Due to delays caused by the weather the first race was reduced to 8 laps. Jake Archer got away from the line well and was running in fifth position in the early laps. He was closely following the two riders ahead as they were battling hard. Archer bided his time intelligently and on lap five saw an opportunity to pass both riders as they were more focused on each other.  Having moved into third position Archer quickly opened a gap on these two. Archer crossed the line to take a fully deserved third place podium in the first race of the season.

Archer’s fortunes changed dramatically on the Sunday as he encountered a problem on the second of the two out laps when he crashed out. The cause was due to having lost heat in his front tyre whilst waiting to get out on track. He was unable to make the starting grid, but was quickly followed by another eight riders on the first lap encountering the same issue!

Despite the disappointment of Sunday, Archer left Silverstone with a great result in race one and 16 championship points. He remains confident of a good performance at the second round at Oulton Park at the end of the month.

Jake Archer said, “I had a really positive Friday, brilliant Saturday, with my first podium of the year, but gutted on Sunday with my crash as I am sure I would have been fighting for another podium. Thanks very much to my supporters and sponsors including City Lifting.”