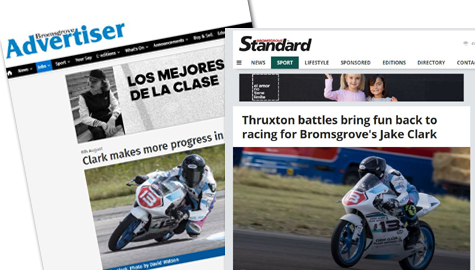 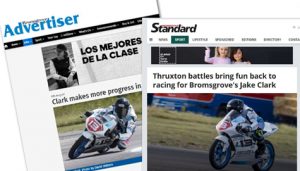 Jake Clark in the points at Thruxton

Jake Clark was back out on his Moto3 for Wilson Racing last weekend. Riding in the fourth round of the Hel Performance British Motostar Championship at Thruxton.

The Bromsgrove racer was looking for some positive results after the crash affected weekend at Brands Hatch.

In very hot conditions Clark made a successful start to the weekend. In free practice one he was eleventh quickest just a tenth outside the top ten. The hotter conditions in the afternoon didn’t enable Clark to improve on his morning’s time so he ended day one in the same position.

The fantastic weather continued as the standard class Moto3 machines took to the 2.4-mile circuit for the thirty-minute qualifying session. Clark continued to improve shaving a second off his best lap time from free practice. The standard class is extremely competitive and despite his lap time of 1:25.447 he would line up on the grid 13th and he was feeling.

After the start of the 12 lap race, Clark found himself behind the main group of riders. Although he was running the same pace he was unable to close up. In the final few laps he was battling with four other riders and crossed the line in 12th position.

The second race was 14 laps of the Hampshire circuit. Overnight Clark and the team had decided to stiffen the suspension further and make other adjustments to suit Clark for race two. This time he was involved in a battle with Adi Behal. The two of them were swapping places throughout the race with Clark just losing out by 0.045 seconds at the line. He finished 12th.

Jake Clark said,” In qualifying I got in with some of the quicker riders so I was trying to follow their lead. But I was struggling with the front end so after qualifying we stiffened the bike right up. It was much bumpier here than last year. It was shaking my eyes out almost! But the bike needed to be as stiff as it could be.

For race two we stiffened the bike more and changed some gearing. I had a good battle with Adi Behal and after a rough spell it brought the fun back into my racing. Some real close racing, bashing bars, we both came in with a real big smile.

Thanks to the Modern Electric Tattoo Company for sponsoring my tyres again this weekend, and also Capelli Salon, 151, VEH enterprises and of course Mandy and Bob.”