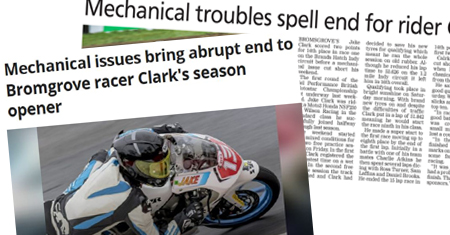 Jake Clark scored his two points for 14th place in race one on the Brands Hatch Indy circuit before a mechanical issue cut short his weekend.

The first round of the Hel Performance British Motostar Championship got underway last weekend. Jake Clark was riding a Moto3 Honda NSF250 for Wilson Racing in the standard class he successfully joined halfway through last season.

The weekend started with mixed conditions for the two free practice sessions on Friday. In the first Jake Clark registered the fifteenth fastest time on a wet track. In the second free practice session the track had dried. Jake had decided to save his new tyres for qualifying which meant he ran the whole session on old rubber. Although he reduced his lap time to 53.626 on the 1.2 mile Indy circuit it left him in 16th overall.

On Saturday morning qualifying took place in bright sunshine. The track temperature had risen significantly from the previous day. Qualifying was going to be difficult with 38 riders from both the GP and standard class all keen to make a good start to the season on a 1.2-mile track. With brand new tyres on and despite the difficulties of traffic Jake Clark put in a lap of 51.842 meaning he would start the race ninth in his class.

Jake made a super start to the first race moving up to 8th place by the end of the first lap. Initially in a battle with one of his team mates Charlie Atkins he then spent several laps dicing with Ross Turner, Sam Laffins and Daniel Brooks. He ended the 15 lap race in fourteenth position to claim his first two points of the year.

Based on his lap times in race one Jake started Sunday’s race from 13th place. He made another good get away from the start line moving up to 11th place early on. Jake found himself in a race long fight with about five or six riders with places changing several times each lap. Unfortunately, his racing was cut short when one lap from the end he suffered a mechanical issue.

Jake Clark said, “I had a really good qualifying on the Saturday. We put on some new slicks and I was inside the top ten. In race one I had some good battles but the track was crowded and one small mistake meant you lost a couple of places. In the second race I finished with black tyre marks on my leathers after some fantastically close racing. It was just a shame we had a problem and couldn’t finish.”