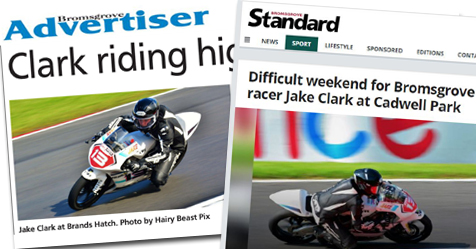 Cadwell Park was the venue for round eight of the Hel Performance Motostar British Standard Class Championship. The Bromsgrove speedster again showed how he continues to learn in his Moto3 rookie year.

On the Friday the riders had two free practice sessions. In FP1 Jake Clark spent time getting familiar with the peculiarities of the Cadwell Park circuit including the infamous mountain. He finished 10th quickest with a lap time of 1:41.085. In the second free practice Clark improved his lap time to 1:40.825 although slipped to 12th overall.

Saturday morning brought with it an early qualifying session. It proved more difficult than usual for Clark. He had his first spill on the Moto3 since he started. On a fast part of the track he lost the rear and crashed out having completed eight laps. Unhurt he still managed to record the 10th best time for the race with 1:40.751.

In the afternoon the Clark lined up for the first of his two 12 lap races this weekend. He made a good start and was running 7th in his class. As the race wore on the riders bunched up. This meant some exciting racing with some pretty hard moves and plenty of paint swapping going on.

Clark’s lack of experience in the class and such intense racing showed a little, but this is part of learning and will only improve with more track time under his belt. The finish was extremely close with four riders separated by just nine tenths of a second. Clark crossed the line in 11th position. His best lap time was 1:40.172.

Clark didn’t get away at the start well and struggled to maintain the pace of the riders around him. Unfortunately, he lost touch with the group and spent most of the race riding on his own. Trying hard to reduce his lap times he never really felt comfortable on the faster parts of the circuit. He finished the race 13th.

Jake Clark said,” It was a hard weekend. In qualifying the back stepped out and I crashed at the fast part of the circuit. Just minor damage to the bike though. Race one was really fun. I got a great start. Then later on I came together with a couple of other riders when I was racing in the group.

I am a bit disheartened with the last race. I was hoping to get down to a 1:39 lap time but I didn’t manage to do it. I struggled round the back end of the track and lost a lot of time there.

On a positive I have finished another two Moto3 races and I’m looking forward to doing better at Silverstone.”

I’d like to thank Wilson Racing, Signs Express, Clarks Motor Solutions, M&B racing and all my other sponsors. Without their help I wouldn’t be racing.” 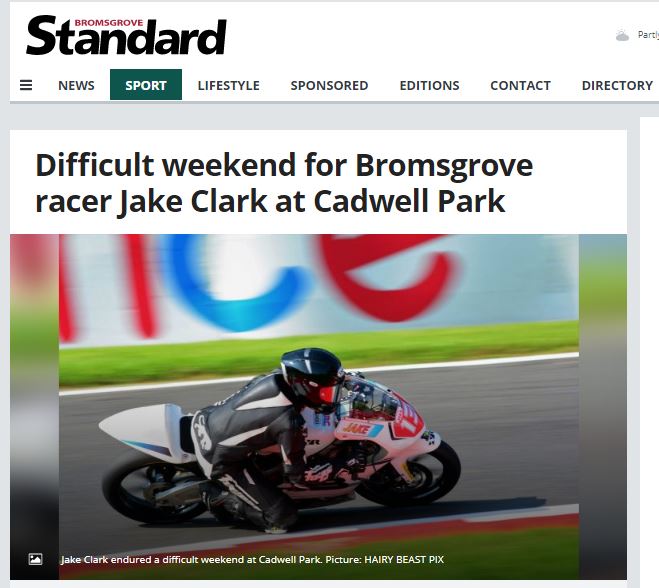