Luke Hopkins is an extremely busy motorcycle rider at the moment. He has been competing in the Team Green Junior Cup, the Moriwaki Cup and also doing wild card entries in the Moto3 series Hel Performance Motostar British Championship.

This press release was for his successful racing at Cadwell Park last weekend in the Team Green Junior Cup. It is being published in the Sittingbourne Messenger this week.

The article also appeared on the Kent News website part of the Archant group of publications.

Kent’s Luke Hopkins was back in action at the weekend but this time in the Team Green Junior Cup on his Kawasaki Ninja 300. The sixth round of nine was contested at the twisty and rolling Cadwell Park with its famous mountain section where bikes often take to the air as they circulate the Lincolnshire track. Going into the weekend Hopkins was in third position (263 points) in the championship behind Joey Lamden (294) and Elliot Pinson (298). 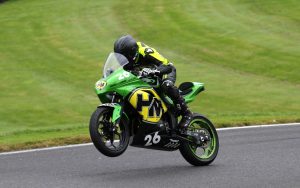 On a cloudy Saturday morning the riders took part in a fifteen minute qualifying session. The riders were quickly out on the circuit looking to make the best of the time available to them. Early on 14-year-old Hopkins was in third position in his class behind Brandon Payne and Elliot Pinson. As the riders got more familiar with the track the times reduced rapidly. Hopkins set his fastest qualifying time on his 1:53.765 lap finishing second in his class. This meant he lined up at the head of row two on the combined grid of Senior and Junior class riders for race one.

There was only one race on the Saturday after an oil spill in one of the other categories caused several races to be cancelled. When the race did finally get underway Hopkins was running second in the first few laps behind Joey Lamden, who had been the inform rider coming into this round. Hopkins then set the fastest lap of the race on lap four before taking the lead on lap five. Unable to open a significant gap both Lambden and Pinson closed in on Hopkins with three laps remaining. With two laps left Lamden overtook Hopkins to take the lead. As the front-runners raced through towards the Gooseneck Elliott Pinson overtook both riders as they battled through back markers. Hopkins was now third but he pushed on and re-took second position from Lambden at the hairpin, turn 17. He then rounded the last corner Barn and crossed the line in second position. He also claimed the fastest lap of the race and won a special trophy for the fastest lap on the Saturday.

On Sunday there were two races. In the 7 lap morning race Hopkins made another positive start running in second place sandwiched between Pinson and Lambden. On the second lap Lambden lost the front of his Kawasaki leaving just two challenging for the lead with the new third placed rider already some distance behind. In the middle of the race Hopkins was struggling to keep up with the pace of Pinson as he dropped back to 1.855 seconds by the end of the fourth lap. However, he didn’t throw in the towel, as he set a series of fast laps clawing-back this time, particularly in the second sector of the track. On the final lap Hopkins was on the rear wheel of Pinson when they rounded the chicane and the final corner Barns. On the drag down the straight to the finish line Hopkins missed out on the win by just 0.074 seconds. He again set the fastest lap of the race.

The third and final race was on Sunday afternoon. Hopkins had to settle for second for the first few corners of the race before hitting the front before the half-way mark of the first lap. He was hotly pursued by Elliot Pinson, the championship leader. These two quickly gained an advantage over the other riders. Hopkins was being pushed hard by Pinson and although he tried to make a break he never managed to get more than half a second ahead. As they entered the final lap the two racers were almost neck and neck, Pinson lurking at the rear wheel of Hopkins looking for an opportunity to take the lead. As the two front-runners encountered back markers at corners nine and ten, Pinson managed to take advantage and hit the front. Hopkins had led the race for almost the entire seven laps but despite his best efforts he was foiled at the line, again by the slimmest of margins, just 0.075 seconds.

Luke Hopkins finished his weekend at Cadwell Park with three second places in some fantastically close racing. It was a very successful weekend that saw Hopkins close the gap on the second placed rider in the championship to just three points.

Luke Hopkins said, “I’ve had a fantastic weekend. I missed out on a win by such a small margin it’s a bit frustrating, but to come away with three second place finishes and to also be awarded a special trophy from Bill Barrowcliff for my fastest lap on the Saturday, it’s still a good weekend’s work. I’ve now closed the gap on Joey [Lambden] to just three points. I can’t wait until the next round but first I’ve got Moto3 and Moriwaki cup races to do.”

His next ride in the Team Green Junior Cup will be at Brands Hatch on the 21-22 August, however, before that he will be competing at the same circuit on the 5 to 7 August in both the Hel Performance Motostar British Championship on a Moto3 in the standard class as well as in the Moriwaki Cup championship at the same venue on the same weekend.

The photo was provided by Hilary Hardy