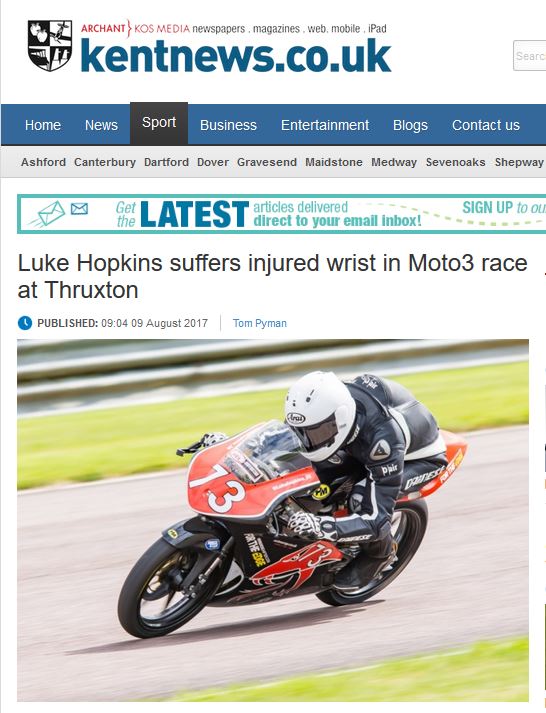 Luke Hopkins had to call an early end to his Moto3 race weekend at Thruxton after injuring his wrist in race one. The 15-year-old from Sittingbourne high-sided at the final chicane at the end of the race and landed awkwardly.

Hopkins was competing in the seventh round of the Hel Performance Motostar British standard class Championship at the Hampshire track.

Although the circuit is one of the fastest on the calendar it is unusual in that it doesn’t have a main straight but rather a series of sweeping corners.

The Moto3 riders took part in two free practice sessions on the Friday. During the second of these sessions Hopkins dropped his lap time by more than a second to end the day in the top ten.

Qualifying was affected by the rain as drops began to fall in sectors one and two after just ten minutes of the session had started. He was running tenth in the standard class at the time. The riders then sat out the shower. As the session entered the final few minutes Team Hopkins took the decision to remain in the pits believing that the track would be too wet and risky. A number of riders did return to the track and unfortunately for Hopkins managed to improve their lap times. He was knocked down to twelfth for the start of race one.

The first race was the ten lap Sprint Race. He had a great start making up four places in the opening lap. Hopkins spent most of the race battling with Ross Turner, Shane Faber and Scott Ogden. Unfortunately, on the penultimate lap he high-sided at the final chicane and damaged his wrist.

Hopkins went out during the warm up session on Sunday morning but with a swollen wrist he was unable to ride properly and so had to call an end to his weekend at Thruxton.

Luke Hopkins said, ”Free practice had gone well. Then we had qualifying and had to make a difficult decision. Risk a fall or go back out in the final few minute. Perhaps we got that one wrong this time. Race one had been good. It was a lot of fun being involved in a battle but I damaged my wrist when I crashed out at the chicane towards the end. This morning it was still swollen although I went out in the warm up. It became more and more painful as I rode. I wasn’t going to do myself any favours trying to race so I decided to sit out the final race.”

Luke Hopkins will be hoping to be back in action for the next round of the World Supersport300 Championship. Round  nine takes place at Lausitzring in Germany on the 18 – 20 August 2017.