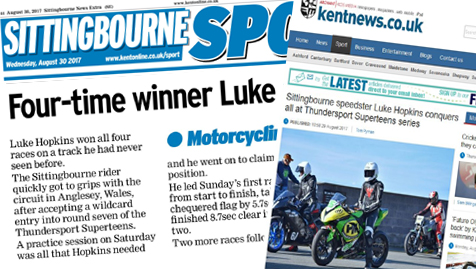 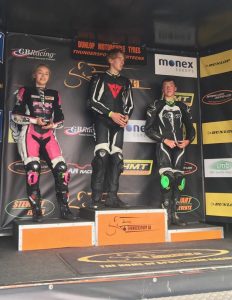 With a break in the World Supersport300 series Hopkins, from Sittingbourne, kept up his track action with a wildcard entry in the Thundersport Superteens series. Round seven of the series took place at the coastal circuit Anglesey, Wales. Hopkins put on an all conquering performance winning all four races on a track he hadn’t seen before.

The Superteens series was once an Aprilia only championship but is now open to various manufacturers. Over the years it has seen the likes of Casey Stoner, Cal Crutchlow, Sam Lowes and Danny Kent take part and go on and make their name in motorcycle racing.

Having never seen the circuit before 15-year-old Hopkins took part in a practice session on the Saturday. He was immediately comfortable with the layout and began to enjoy himself from the start of the weekend.

Qualifying took place on an overcast Sunday morning. During the session, he continued to improve his lap times as his familiarity with the track grew. On his twelfth and final lap, he set a lap time of 1:17.706, which was three-tenths better than his previous best lap during the session and put him on pole position.

At lunch time the riders lined up on the grid for the first of the two races that day. Hopkins made a great start and led the race from start to finish. He led by 5.7 seconds and beat his qualifying lap time with a 1:17.067.

In the second race, he improved his winning margin to 8.7 seconds as well as cutting the fastest lap time to 1:16.831.

When the riders woke up on bank holiday Monday the were greeted by a clear blue sky and a strong wind at the circuit. In the third race of the weekend, Hopkins got away slowly dropping to fourth on the first lap. At the end of the second lap, he had swept by two riders into second position. The following lap he was back at the front. He then started to pull away finishing with a lead of 11.6 seconds. He also continued to cut his lap time, finishing the race with a 1:16.707. 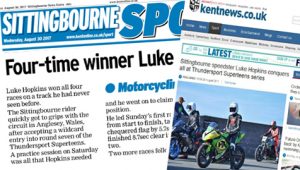 With one more race to go Hopkins had eyes on the lap record. He launched from the start line and instantly set about setting a fast pace. In the early laps, he was two seconds quicker than the rest of the field. Pushing hard he was less than half a second from the lap record. Towards the end of the race, he came across several back markers which hindered his hopes of beating the lap record. He still went on to win the fourth race by almost 13 seconds.

Luke Hopkins said, “I loved the circuit, the people and the whole experience. I can’t wait to race with them again.”