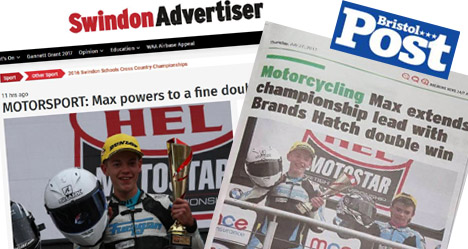 There were two free practice sessions on Friday. In FP1 Max was third before experiencing a technical problem toward the end of the session. With everything sorted for FP2 it was business as usual as Max returned to the front of the standard class field with a time of 1:37.679. 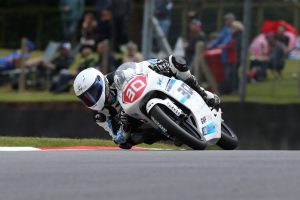 There was heavy overnight rain so with qualifying starting at 9am on Saturday morning the track was still damp. The Moto3 riders began the thirty minute free practice session on wet tyres. Knowing the track was drying Max didn’t take any risks in the mixed conditions. With around ten minutes remaining he switched to slick tyres and quickly moved up the field.

He was unlucky with traffic and unable to make a truly clean lap time on the dry tyres. However, he still managed to finish second in his class and ninth on the combined GP and standard class starting grid. He had to settle for a lap time of 1:40.789 in difficult conditions, but Max was confident that he still had a bit more to come.

As race one got closer the clouds blackened and the threatened rain arrived in force. So much so that the race was rescheduled for Sunday.

After a positive warm up session on the Sunday morning Max found himself on BSB Radio, with his team-mates. After negotiating the questions of Paul Musselle he had the serious business of the 14 lap feature race. 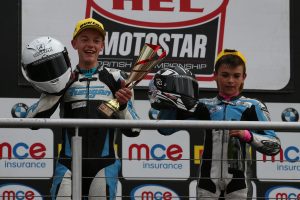 Max Cook made an excellent start and immediately began to ease away from the rest of the standard class field. Whilst a battle for the remaining podium positions ensued behind Cook, the Wilson Racing rider focused on his own race and steadily stretched away. He spent most of his time riding in a group of GP class riders. He went on to cross the line with a gap of more than 17 seconds over the nearest other standard class rider. He also set an amazing new standard class lap record (1:35.425)

The rescheduled race from Saturday was tagged on as the final event on Sunday. With grid positions based on fastest laps from race one Max’s impressive pace meant he lined up 8th in the combined GP/standard grid for the start of race two.

The forecast rain never materialised and Max wasted no time launching himself from the start grid and quickly opened a gap at the front of the standard class. He managed to increase his lead by over a second a lap to end the weekend with what turned out to be a comfortable double victory. Both his main competitors failed to finish the race as Max went on to extend his championship lead to 84 points.

Max said, “Danny [Webb] told me we had to try hard in FP1 because of the weather. But towards the end of the session we had a problem so I finished third. In the end FP2 was dry and we managed to get a really good bike setting.

Qualifying was a little bit damp because of the rain the night before. So I did three laps on wets before coming in. Then we went out for the last ten minutes. I really went for it at the end. I was on a really good lap and then I came up to two other riders which lost me a lot of time. I got second.

Race one was good. I overtook Thomas [Strudwick] straight away and I was running with the GP bikes. So I tried to stick with them. I was doing consistent 1:35s. It was probably the best race I’ve had this season.

Race Two I started 8th on the grid. I tried to do the same thing again, to go with the GP bikes. This time Thomas tagged along for the first part of it. It was really tough in that last race. The tyres were wearing off and I just didn’t have as much grip. Also because I started so far up the grid I was getting overtaken down the straight by the GP bikes and then they were holding me up in the corners. So I couldn’t go as fast as I wanted. But it felt like I was battling for a decent place overall in the race despite racing a standard bike. And it was another win.

Thanks to Gary [Wilson] for an excellent bike and also to Danny [Webb] for his help too.”

Max’s next race will be at Thruxton 4th to 6th August.