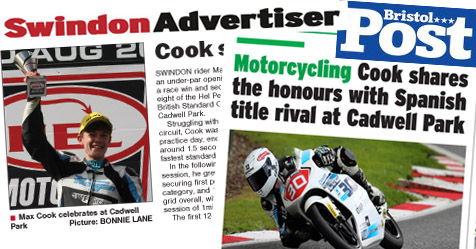 The first day proved to be a little disappointing for Cook, by his own high standards. Although he has ridden the circuit before he wasn’t adapting well from the fast flowing curves of Thruxton last time out to the tight and twisty nature of this narrow Cadwell Park circuit. He ended the first day third quickest around 1.5 seconds off the pace of the fastest standard class rider.

Saturday morning was a different day. Up early for the qualifying session Cook grew in confidence as the 25 minute session went on. The team had made some adjustments to the front suspension and this was helping Cook with his braking. He secured first position in the standard category, and 12th on the combined grid overall, with a superb final lap of the session 1:35.950.

On Saturday afternoon the riders were out for the first of their two 12 lap races of the weekend. Although on pole position it was his rival, Victor Rodriguez, who took the lead in the standard category as he shot past Cook on lap one along with about three GP class riders. Having worked hard to stay with one of the GP class riders Cook managed to work his way back to his rival. On the penultimate lap he overtook Rodriguez. However, the race wasn’t finished as the lead changed hands three more times on the final lap before Cook secured victory at the chequered flag.

On Sunday, Cook made a really good start to race two, but Rodriguez came under him at the end of the back straight and into Park. However, he out braked himself and ran wide enabling Cook to regain the lead. Despite having just over a second lead Rodriguez caught up with him on the fifth lap and overtook him.

Cook’s race became more difficult when a GP class rider got between him and Rodriguez. The GP rider had more straight line speed making it very difficult for Cook to overtake but then Cook was faster in the corners. This enabled Rodriguez to pull a gap of over a second on Cook.

Trying hard to get by the GP rider Cook ran into the Hall Bends too fast and ended up cutting across the grass going into the hairpin. He lost more time but got his head down. It took another couple of laps to catch the GP class rider who then ran wide allowing Cook to get through.

With three laps left Cook set the fastest lap of the race (1:35.091) as he tried to chase down the race leader. On the last lap he was on the rear wheel of Rodriguez but the Spanish rider knew he was there and rode defensively. Cook thought about a move but then thought about the championship. He crossed the line second just 0.053 seconds behind Rodriguez.

Cook said, “In race one Victor [Rodriguez] came past proper fast along with three other GP bikes. They went off in their group and I had a massive moment on the first lap over the mountain, and I dropped back quite a long way. That whole race I was just trying to catch up. I got ahead of him, then on the last lap he got me into the first corner. I got back into Charlies and he had my slipstream on the Park Straight. He out braked me but ran wide so I cut back inside. I stayed ahead the rest of the lap and won the race.

In race two I got a good start to the race but Victor got in front of me. Then I got stuck behind a GP rider which held me up. I went on the grass twice and don’t know how I didn’t crash! I got back to Victor but it was difficult to pass. So I thought about the championship and 20 points were better than one race win.”

Cook now has 346 points. His lead in the championship is 105 points with seven races to go. The next round is at Silverstone on 8-10 September.