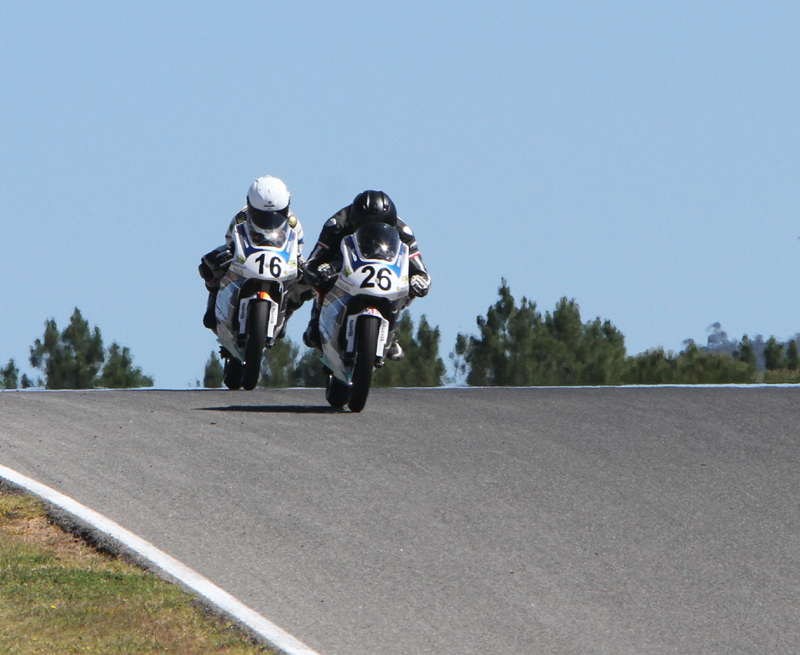 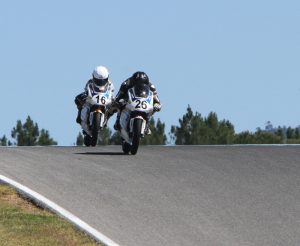 Luke Hopkins was out in Portugal for the fifth round of the Moriwaki Cup last weekend. The Moriwaki Cup is a championship for youngsters between 12 and 16 who all race on the same Honda powered 250cc motorcycle capable of 125 mph (200 kph).

The youngster from Sittingbourne didn’t attend the free practice session on Friday in order not to miss too much school, as he also competes in the Team Green Junior Cup a Kawasaki racing series in the UK. This meant that on Saturday he had to learn the track and qualify in the space of 25 minutes. Consistently improving his lap time Luke Hopkins qualified fifteenth for the first race of two on the Sunday, with a time of 2:11.604.

Sunday started with a positive short morning warm up in which Luke improved his lap time, registering 2:08.882 and finishing the session four places higher in eleventh.

Race One took place at 10:45 and was a ten lap affair. Hopkins further improved his lap time to 2:06.493 during a thrilling encounter that saw him battling for 11th position with Jeroen Hilster and Sophia Liebschner throughout the race. Having overtaken Liebschner with five laps to go he eventually lost out to the German rider finishing 13th. Luke Hopkins collected 3 championship points.

Race Two was at lunchtime and was a further 10 laps of the Algarve circuit in hot conditions. Unfortunately for Luke he crashed out on the opening lap. In order to avoid a collision with another rider Luke Hopkins grabbed too much brake and he suffered a heavy fall. After initially visiting the medical centre, Hopkins travelled to the nearby hospital for a CRT scan and was thankfully given the all clear to fly home the same day. He was back at school by Tuesday morning.

Luke Hopkins left Portimao with five more championship points and remains twelfth in the championship. He said, “The weekend got better and better and my lap times fell considerably as I grew in confidence. I was pleased with my result in race one and hoped to improve in the second. Then I made a mistake early in the second race and crashed out. The important thing is not to dwell on it but to learn from it. I’m now really fired up for the next race.”

Luke Hopkins will next be racing his Kawasaki in the Team Green Junior Cup on the 17-18th June 2016 at Oulton Park.