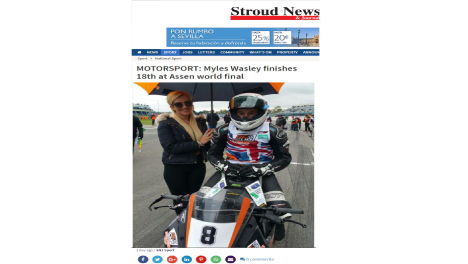 Having qualified for the KTM RC Cup World Final in Assen at the last corner of the last round at Donington Park, Wasley was eager to go racing. The Dutch crowd turned out in full support of the event and there was a large UK contingent over the weekend too.

This was Wasley’s first time racing at the Cathedral of Speed, as the TT circuit Assen is also known. The 2.8 mile iconic track has a number of high speed corners as well as the famous final chicane where many a race has been won and lost.

In Free practice one Wasley found himself one in a field of 33 riders from all over the world. He spent his time familiarising himself with the new track. He finished 24th on the time-sheet after completing 10 laps.

In the second free practice session his confidence was clearly beginning to show through. He managed to squeeze 12 laps in during the 25 minute session and moved up nine places to finish 15th quickest. He was also the second quickest British rider of the five at the circuit.

There was rain during the morning but by the time the KTM rider took to the circuit it had stopped and the track was drying. In a highly competitive and close qualifying session Wasley finished in 25th position for race one of the KTM RC Cup World Final. The fact his lap time was less than a second off the rider in 17th position shows how close the riders were.

Wasley made a steady start to race one maintaining position for the first three laps, before moving up to 23rd shortly afterwards. By the middle of the race Wasley was battling with Italian rider Barneba. Wasley then overtook fellow British rider Fox-Moreton to go into 21st place and lead a group of five riders. On the penultimate lap he lost out to two other riders and on the final lap was unable to re-take the positions. He crossed the finish line in 23rd position.

The second race saw Wasley line-up on the grid in 28th position but by the end of the first lap he had made up five positions. Lap two and he gained further ground and was running behind fellow British rider Swann in 22nd place and in a group of around seven riders. Wasley, continued his exciting battle with Swann and Dutch rider Ouden for the next few laps. As he crossed the finish line he ended the second KTM RC Cup World Final race in 19th place.

His combined results from the two races placed him in a fantastic 18th position overall.

Myles Wasley commented after the race, “It’s been an amazing experience! We were riding against the best riders in the various KTM Cup series across the world. The competition was fierce, but the Assen circuit and the racing experience was incredible. Our season is now over and after finishing fifth in the UK series in my rookie year we begin the process of fund raising to mount a challenge for the title in 2017.”