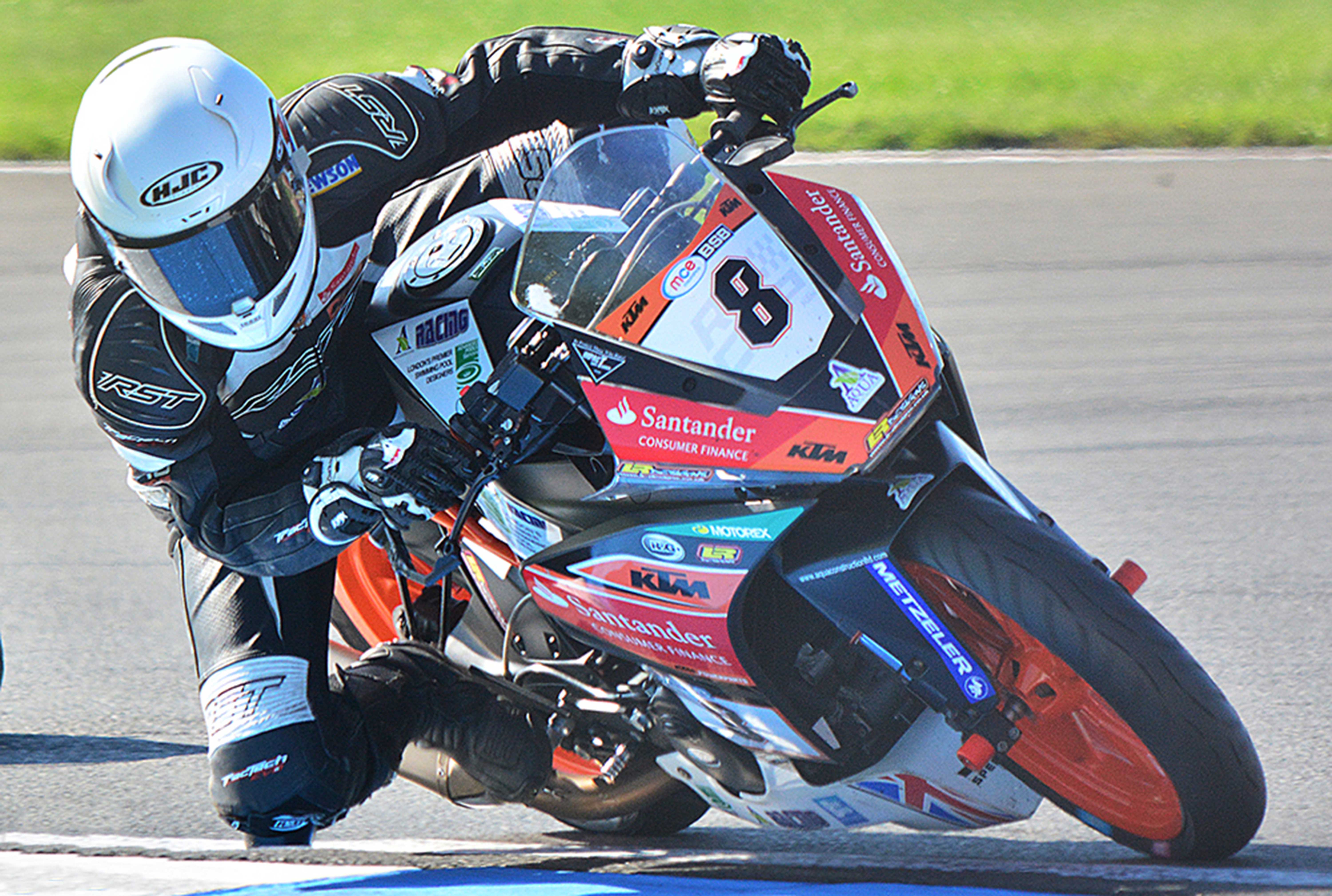 The Stroud News and Journal kindly used our press release for the basis of their article on Myles Wasley’s fantastic race weekend at Donington Park. Wasley had to win or come second in the final race of the season and somehow the 15-year-old kept calm to qualify for the KTM Cup World Final in Assen.

Here is the link to their website sports article on Myles Wasley.

Our article was also used in the young sportsperson section included in the Gloucester Citizen and Gloucester Echo.

The full press release was as follows and appears on the Facebook page for Myles Wasley:-

Stroud youngster Myles Wasley had a heart-stopping weekend at Donington Park where he qualified for the KTM Cup world final but only after plenty of drama. Having started the weekend with a superb second place he was taken out in the second race and therefore didn’t score any points. Fully committed in the final race he finished second, having had to start tenth on the grid, to take him to a well-deserved world final at the famous Assen track in Holland.

The 15-year-old was back in action again this weekend but in the KTM British Junior Cup, a support series of the British Superbike Championship.

It rained throughout the free practice session so unfortunately there was little to be gained other than some experience negotiating the two and a half mile Donington Park circuit in the wet conditions.

By the afternoon the sun had come out and the track had dried for the first qualifying session. After the disappointment of free practice Myles Wasley was quickly on the pace in the better conditions. Wasley set a superb time of 1:53.879 missing out on top spot by just 0.051 seconds at the close of Q1.

As the lights went out for the first of three races this weekend Wasley made a superb start. Second into the first corner he was soon out front after the race leader crashed going through the first corner. Wasley was then able to open a gap over the field rising to 2.5 seconds by the third lap.

As the race went on the chasing pack began to close the gap. On the penultimate lap Wasley was caught by Wright and Nixon dropping him to third place. Although Wasley was unable to recover the lead he did recover second place and secured twenty valuable championship points.

Race Two was just a few hours later. With grid positions based on the fastest laps in race one, Wasley lined up at the head of the second row. He got away well moving up to third place at the end of lap one.

Unfortunately, on the second lap another rider tried an over ambitious move up the inside of Wasley at the hairpin. The result was the two riders crashed out ending both their races. Wasley was frustrated as running third he felt that he could achieve another podium or even a race win. Furthermore, with the final race grid positions based on the fastest laps in race two Wasley would have to start tenth.

The third and final race was on Sunday and Wasley had to win or finish second to qualify for the KTM Cup world final. Forgetting about the disappointment of race two on Saturday, Wasley focused on making a good start. He made an unbelievable start gaining four places on the first lap to move into 6th position. However, with the race being just 8 laps there was concern he would have difficulty getting to the front, especially if the front-runners broke away in the early laps. Under pressure from another rider Wasley lost a place on the second lap dropping to seventh before a leading rider crashed out at Goddards enabling Wasley to regain 6th.

With four laps remaining Wasley moved up to fifth place 0.141 seconds behind the rider ahead. Realising the laps were running out Wasley overtook fourth placed Swann as they both ran towards the old hairpin. He kept pushing on and managed to pass two more riders with just three laps remaining putting him in third position. However, this wasn’t going to guarantee him a world final place. He needed to finish second.

The rider ahead of him was Aaron Wright, the KTM British Junior Cup champion for 2016. A rider that has won 11 races this season. On the final lap, Wasley was undaunted and braked late going towards the Foggy Esses to go through on the current Champion. Wright came back relegating Wasley to third as they came out of the penultimate corner.

Myles Wasley said afterwards, “I came into this weekend looking for the win and with a second in the bag I needed a solid second race finish but was denied it by a desperate move from another rider taking me out at the old hairpin. Luckily the bike wasn’t too badly damaged and I walked away pretty much ok. That race pretty much dashed my hopes of achieving 2nd overall and a place in the World’s. In race 3 I was out for a win but starting 10th it was going to be a challenge with lap times so close. But I battled on for a second just pipping Aaron [Wright] to the line. With a front row start a win may have been possible. A massive thanks to all my sponsors for getting me through this year and everyone who helps me you all know who you are. A big thanks also to Richard, Mat, Steve Plater and all the BSB crew and orange army. 2017 is just around the corner we hope to reveal our plans soon.”