Nesbitt in the points on Moto3 Junior World Championship debut 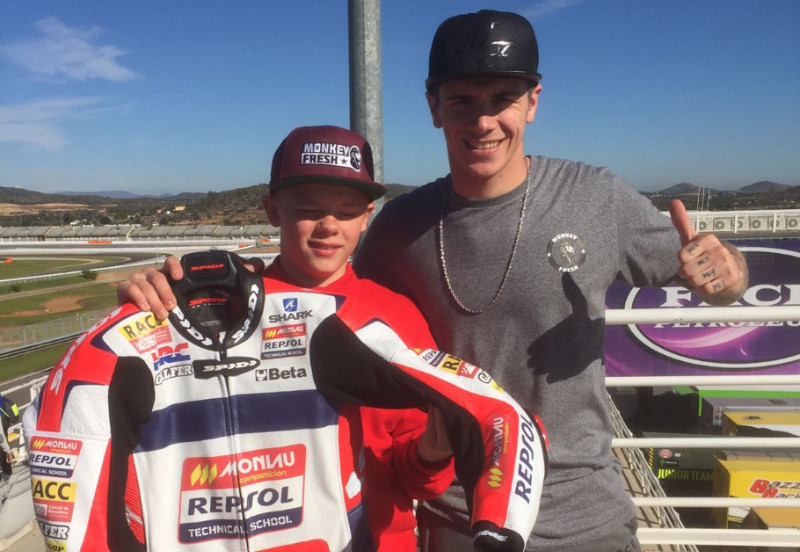 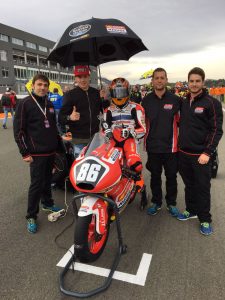 The Moto3 JWC is seen as one of the best shop windows for riders looking to make the move to MotoGP paddock in the future. Nesbitt was riding for a new team, on different tyres and on a circuit he had never ridden before.

Fortunately for Nesbitt he was in great company as he was riding for the extremely professional Spanish team Monlau Engineering. In addition, he was being mentored over the weekend by none other than British MotoGP rider Scott Redding.

Due to the numbers of entries at the final round the qualifying was split into two groups. In the first qualifying session Nesbitt managed a lap time of 1:40.885 which placed him ninth on the time sheet and less than 1.2 seconds from the eventual championship winner Lorenzo Dalla Porta!

In the second qualifying session Nesbitt was unable to beat his previous time. After the lap times of both groups had been combined and the huge 44 rider grid for the two races on Sunday worked out, Nesbitt would line-up on row 6 in 18th position, a marvellous achievement in itself.

On Sunday morning the track temperature was cool for the first race, but despite this there was drama before the race even started. Championship leader Dalla Porta’s bike caught fire on the start line and had to be quickly removed from the circuit. After a short delay the lights went out and Nesbitt began his first ever Moto3 JWC race. He made up one position quickly.

Mid-way through the race Nesbitt was battling hard with Stefano Nepa and Vicente Perez as he held on to 15th position. Nesbitt went on to finish race one in an incredible 11th position and score five points in his first Moto3 JWC race.

In the second race Nesbitt lost a place early on in the frantic exchanges of the opening laps. By the end of the fourth lap he had recovered the position and was then second in a large group battling for most of the race. By the halfway stage Nesbitt had fought his way to 16th place and held his own in a group of riders to cross the line just six hundredths of a second away from scoring points again in only his second Moto3 World Junior Championship race. 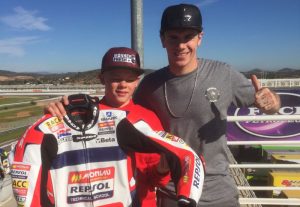 Charlie Nesbitt said, “Firstly I would like to thank Scott [Redding] and Michael [Bartholemy] for giving me this opportunity with Monlau it was such an amazing experienc. The racing is so close I even have rubber off someone else’s front tyre on my left leg! In the first race I had a good start and where the track was cold and spitting with rain everyone took a few laps to settle in and then battled all the way to the line finishing 11th in my first race there was unreal.

In the second race I had to start a row further back in the Centre and got away well. I was a little to cautious in the first two laps, I think just because of the lack of time on the bike, but the battles through the race were amazing.

Overall I am really happy with my debut in the CEV but a bit disappointed in my position in the second race.

I would like to say a massive thankyou to my family friends and sponsors for everything this year everyone has put in so much effort and I’ve had the time of my life doing it thank you all again.”