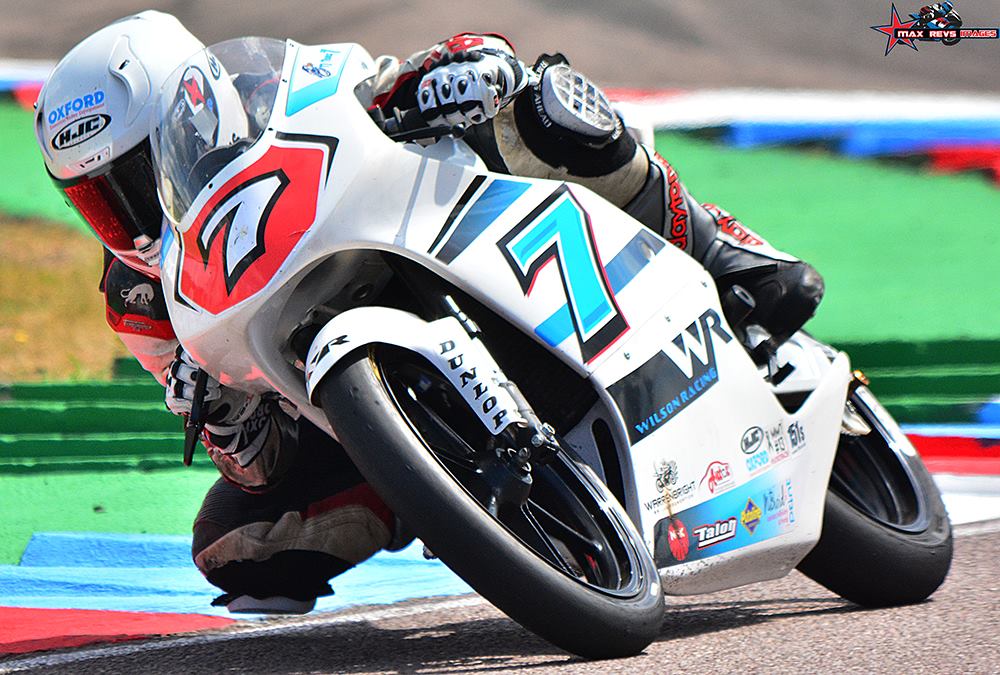 Having travelled back from Germany last weekend, following an invitation to race in the ADAC Europe Cup where he was a fantastic tenth at the Sachsenring, there was no time for rest for the Puriton racer. The Thruxton circuit in Hampshire was hosting the six round of the Hel Performance Motostar Championship, the Moto3 support series to the British Superbike Championship. 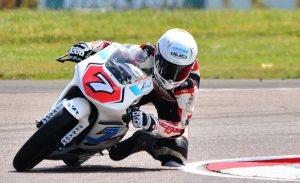 The Thruxton circuit is built on the site of an old World War II airfield and has no real straight but a series of fast flowing curves, meaning the riders are lapping at average speeds of around 90 to 100 mph.

There were almost ideal conditions for the Wilson Racing rider for free practice on the Friday. He started steadily re-familiarising himself with the circuit before a red-flag during the session brought everyone into the pits. The session was restarted soon after where upon TJ Toms made reductions to his lap times of over two seconds. By the end of the thirty minute free practice he recorded a time of 1:26.418 which put him sixth quickest in the standard class.

On Friday afternoon the rider went out for Q1. Immediately TJ Toms noticed something was up with his bike and was forced to return to the pits without completing a lap. The team worked frantically to fix a mechanical problem. TJ Toms did manage to make it out but with less than ten minutes of the session left. With only limited track time he posted the tenth quickest time in Q1.

After the problems in Q1 Toms was looking for some better luck on Saturday morning as he rode out for Q2. The lower track temperatures meant he had a good chance of a better lap time and the Somerset rider didn’t disappoint. He managed to reduce his lap time by 1.632 seconds in Q2 moving him up to 6th in the standard category.

However, the Saturday afternoon race didn’t go according to plan. TJ Toms made a solid start to the race making up many positions, but when he tried to turn in at the final chicane of the very first lap, TJ’s handlebars clipped the rear of the seat unit of another bike which had been involved in a separate incident with a different rider. The result was TJ Toms lost control of his bike and crashed out. He got his leg trapped in the back wheel and twisted his knee. The accident also caused burning to his arm after sliding across the tarmac and gravel. He was taken to the medical centre for treatment.

After getting the all clear from the medical centre to race on the Sunday TJ Toms was forced to start from second to last on the grid after not finishing race one. He launched himself at the start and by the end of the lap had moved up to seventh place. Clearly starting so far back meant there was now a gap to the riders in his category ahead. Despite the pain in his arm he pushed on and was lapping at a second a lap quicker than the riders in front of him in his category. He managed to make up another place but just ran out of laps to catch anyone else so crossed the finish line in sixth position.

TJ Toms said, “Last weekend I was racing at the Sachsenring alongside the MotoGP event and we finished in tenth. Then here we are at Thruxton a week later. It’s been an amazing couple of weeks. Unfortunately, we had some bad luck getting caught up in someone else’s accident yesterday. Today we recovered well by finishing sixth from so far back on the grid. The next race is at Brands Hatch on the 7 August a track I really like so we’ll look to pick up more points there”.