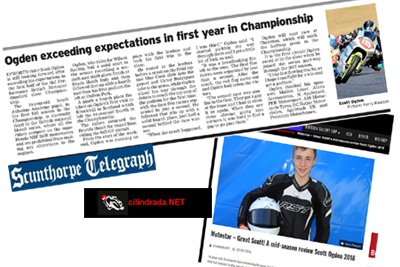 14-year-old Doncaster born motorcycle racer Scott Ogden has exceeded his own and others expectations in his first full season in the Hel Performance British Motostar standard class Championship. Ogden is currently third in this British national Moto3 series. All the riders compete on the same Honda NSF 250R motorcycles and are prohibited from making any alterations to the engines. The result is some of the closest and most exciting racing action you can see in the UK.

The South Axholme Academy pupil, who rides for Wilson Racing, told us,” I set myself a goal of a top five by the end of the year and maybe top ten in the championship at the end of the year”. He has already achieved his first goal having taken his first win at the Brands Hatch circuit in Kent in the last round.

When I asked him about riding the Wilson Racing Moto3 he didn’t hesitate in telling us how good it is to ride. Ogden praised the team saying,”Even before we go to the track Gary [Wilson] has got all the data, so the bike set up is nearly perfect before we start. Just a few tweaks. Max [Cook, 2017 standard class champion] was so dominant last year, and we have all that data. I’m about the same size as Max was last year so it really helps us get a good start to the weekend.”

Up against the best young riders

The Moto3 class is very competitive with the championship leader, Victor Rodriguez also running well in the European Talent Cup. The 2017 champion now riders in the Red Bull rookies as does the 2016 champion. This year thirteen of the riders in the British Motostar standard class, including Scott Ogden, are also competing in the British Talent Cup. That too is a standard Moto3 championship and is run by the organisers of MotoGP as part of their programme to guide up-and-coming motorcycle talent into MotoGP and World Superbikes. That is the calibre of rider Ogden is competing against, so his race victory is all the more pleasing.

The season started on the Brands Hatch Indy circuit mid-April. Because the circuit is only 1.2 miles long it is often congested adding to a racers problems. Ogden finished with a seventh and a sixth in that first round and a positive start. He said, “It’s not a bad track to ride, it’s just that there is a lot of traffic. It’s a bit cramped with around 40 bikes so you don’t get much space.” His results put him sixth overall and already inside the top ten.

Round two took place at Oulton Park early in May.  “It was quite a good weekend throughout. I started off well. I was third in free practice one. Fourth in free practice two and it sort of boosted my confidence.” He went on to qualify in fourth place and then finished the race in the same position. His continued improvement saw him end the day six seconds from the podium with a lap time that was almost a second quicker than his qualifying time.

In the second race, Ogden was able to show he had the pace to run with the leaders. “I couldn’t believe it to be fair. Victor [Rodriguez] had some problems in the second race. I was just happy to be running up the front with Cameron [Horsman] and Fenton [Seabright]. Me, Fenton and Cameron got away at the beginning. It was a really good battle the whole race. Cameron crashed on about lap ten, I think, and that left a gap between me and Fenton [who was leading the race], so I was a bit in no man’s land for the last four or five laps.”, Ogden recalled. In fact, he finished just over a couple of seconds behind the race winner on the second step of the podium and ahead of a much more experienced rider in Thomas Strudwick. “I was ecstatic!” Ogden had his first podium in just the second round of the season.

The Moto3 championship then made the long trip to Knockhill in Fife, Scotland for round three. This is another short circuit, just 1.3 miles with the starting grid on a hill. Ogden told us, “It was my first time at Knockhill. I thought it would be an easy track to learn but… It is an easy track to learn but it’s learning how fast you can go through some of the blind spots, I struggled with. We struggled with gearing a little bit as well. I didn’t really have the pace down the straight.”

He finished race one in ninth position. They decided to make some small changes to the set-up but did switch to a softer compound front tyre. These minor adjustments combined with a tyre switch seemed to pay-off. Ogden crossed the line in fourth place just over a quarter of a second from a second podium finish of the year. He left Scotland fourth overall in the championship.

For round four the riders returned to Brands Hatch but this time they rode the full GP circuit. Ogden was feeling positive after the first three rounds. “I thought it was possible to get a podium. I didn’t know Max [Cook] was going to be there. That was a surprise but even with Max there I thought I could get a podium”, he said.

From free practice on the Friday Ogden’s confidence grew. “From day one I was running with the leaders, which was really pleasing. Max was running top ten in the Red Bull Rookies  and Victor  [Rodriguez] is top ten in the European Talent Cup and I was with them.”

In the first race of the weekend, Scott Ogden fell 2.8 seconds behind the leading group of riders after he got stuck behind a slower rider on a GP class Moto3. These machines have much more power down the straights but the rider was holding up Ogden, and the group of standard class riders he was with, through the corners. However, Ogden maintained a good pace and when the front-runners began to battle for position between themselves he was able to reel them in, within a few laps. Then on what turned out to be the final lap, Ogden was up to third position when a GP class rider lost control of his bike and took out Max Cook. This caused chaos in a packed group. Cook slid off into the gravel and Victor Rodriguez had to take to the grass. Ogden sliced his way through the debris. He modestly told us, “When the crash happened, I was third. I started picking my way through them and I got a little bit of luck as well.”

It was a breathtaking finish to the race. The first five riders were separated by less than a second. After the crash, the red flag came out and Ogden had taken the victory.

In the second race, he followed it up with a solid fourth place. Ogden recalled, “It was similar to the first race. They got a gap at the front and I had to close it in again. When they are three abreast going into corners it was hard to find a gap to go past them.” He crossed the line fourth just half a second behind the race winner in another enthralling battle.

The next round takes place at Thruxton in Hampshire and race one will mark the halfway point of the championship. This was the first circuit Ogden raced at in the class when he joined the series part-way through the 2017 season. Now in his first full Moto3 season, Ogden is looking forward to returning there. “I like fast flowing tracks, so I hope I can fight for a win and get a podium. ”

Finally, Ogden wanted to say, “It is great being part of such a well-organised team but I wouldn’t be racing if it wasn’t for the help I get from my sponsors. Thanks to Malton Laser, Allots Accountants, N Appleyard, PFR Motorsport, A18 Motorcycle Tyres, DC Butler Motorcycles and Agriwash UK.”