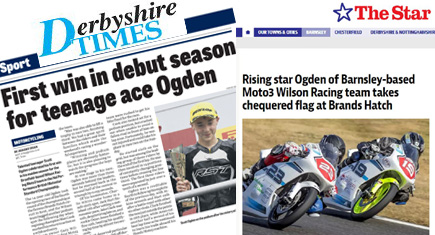 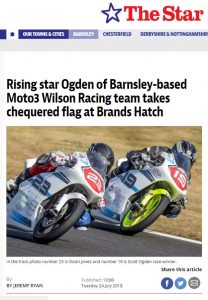 Gary Wilson’s Dronfield based Moto3 team took victory at round four of the Hel Performance British Motostar standard class championship. The team were racing at Brands Hatch in Kent and welcomed back 2017 championship winner Max Cook for a wildcard entry. Ogden took a win on the Saturday whilst reigning champions cook stood on the podium on Sunday.

Fielding six riders at the event it was 14-year-old Scott Ogden that took the win in the first race and his first ever Moto3 victory in his first full season.

At one stage Ogden had been more than three seconds behind the race leaders but put in a fantastic second half of the race to close up on the front-runners. Max Cook was in the leading group and looked on for a podium position but on lap nine a rider fell and Cook was unable to avoid his bike in the track. Although he crashed out he was uninjured. In the chaos that then surrounded the five leading standard class bikes Scott Ogden went on to take race victory by 0.055 seconds.

Just behind the leading group Charlie Atkins came home in a safe sixth place. Jack Hart and Jake Clark finished 11th and 12th. Hart set a metronomic pace throughout riding in the mid 1:39s for virtually the whole race. Clark had fallen off in qualifying and the team were pushed to get his bike fixed for the race and despite tiring he put in a great effort. Rookie Osian Jones crossed the line 19th, beating his qualifying lap time by almost two seconds.

In race two on the Sunday Ogden lined up second in the class after his best lap time fell just 0.016 seconds from the fastest rider. Max Cook started sixth but was quickly at the sharp end running in the leading group of three riders at the end of the first lap. Ogden was fourth about half a second further back. Cook was involved in 14 laps of constantly changing positions before adding to Wilson Racing’s podium tally with a third place. The front three riders were separated by just over a tenth of a second. Coming home in a fourth to follow up his race one victory was Scott Ogden.

Charlie Atkins finished the second race in seventh place having chased down the rider ahead but just running out of laps to repeat his position from Saturday. Jack Hart was involved in a battle 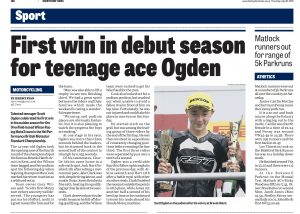 with six riders. He led them home taking 12th place at the flag. Jake Clark finished the race just outside the points in 16th place and Osian Jones cut another half a second off his lap time as he continues to learn aboard his Honda Moto3 machine.

Team owner Gary Wilson said,” Scott’s first Moto3 race victory is very well deserved. The youngster has put in a lot of effort and it is great reward for his efforts and for the team. Fortunately, Max wasn’t injured and was able to lift a trophy in race two finishing third.

We have a great spirit between the riders and their families which makes the weekend’s racing a wonderful experience. Winning and podiums are obviously fantastic but it is also pleasing to watch the progress the boys are making.”